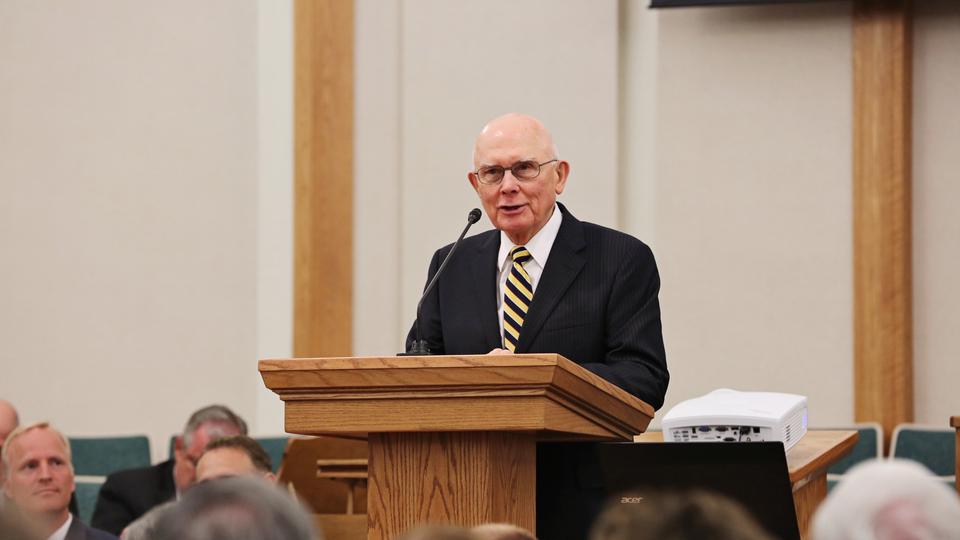 At a religious freedom conference for Latter-day Saints in the Dallas and Fort Worth areas, Elder Dallin H. Oaks encouraged members to get involved “in a constructive way in the vital contest for religious freedom.” Emphasizing messages he has shared previously, he counseled local Mormons to seek a cease-fire in the culture wars and to employ a “fairness for all” approach in defending religious freedom because our pluralistic world requires we “live peacefully” with each other.

Elder Oaks, a member of the Quorum of the Twelve Apostles of The Church of Jesus Christ of Latter-day Saints, was joined by Church general counsel Elder Lance B. Wickman and Elder Von G. Keetch of the Seventy. Their comments at this regional religious freedom conference (the first of its kind) coincide with the creation of a religious freedom page on LDS.org.

Although religious freedom may seem a subject more fit for those with law and political science degrees, Elder Oaks said “literally everyone, from kindergarten children through the ranks of professionals and mothers and fathers and friends and neighbors can and should understand what religious freedom is and why it is important.”

Elder Wickman recited a brief history of the struggle that was the creation of the United States Constitution, and he reminded Mormons that in addition to belonging to a church they are also citizens. It is “we the people” who are to “do the hard work of citizenship that is necessary to protect and preserve rights so painfully established” in America, he said.

Like Elder Oaks, Elder Wickman urged Latter-day Saints to actively participate in today’s religious freedom discussions. He said the most important freedoms to protect are “those that relate to private and ecclesiastical contexts, or are part of the rights of all citizens.” Other freedoms, such as “those that relate to commercial and governmental settings will of necessity require greater pragmatism and compromise.”

Elder Wickman encouraged Church members to get involved in the religious freedom discussion because “the days are long past — if indeed they ever really existed — when we can lead narrow, provincial lives merely as ‘saints,’ focused only on our families and our local Church congregations.”

Engaging in the hard work of dialogue with our neighbors requires both tolerance and a firm understanding of truth, Elder Oaks said. He reminded Latter-day Saints that “respect or tolerance for the opinions or behavior of others is only one side of a two-sided coin. The other side is always what is true. The coin of tolerance must never be used without being conscious of both sides.”

Commenting on this analogy, Elder Keetch asked members to consider “how you can best firmly teach and defend the doctrine of the gospel of Jesus Christ, while at the same time showing love, kindness and understanding to a person who may not accept that doctrine.”

Other conference participants included Alexander Dushku and Matthew Richards (both of whom are attorneys in Salt Lake City) and Hannah Smith, senior counsel at the Becket Fund for Religious Liberty in Washington.

Injured Senior LDS Missionary in Brussels Terrorist Attack Opens Up
← Previous
The Ultimate Guide to Studio C: Everything You Wanted to Know
Next →
0 shares