What I Learned From Visiting 55 Temples In 2 Years. 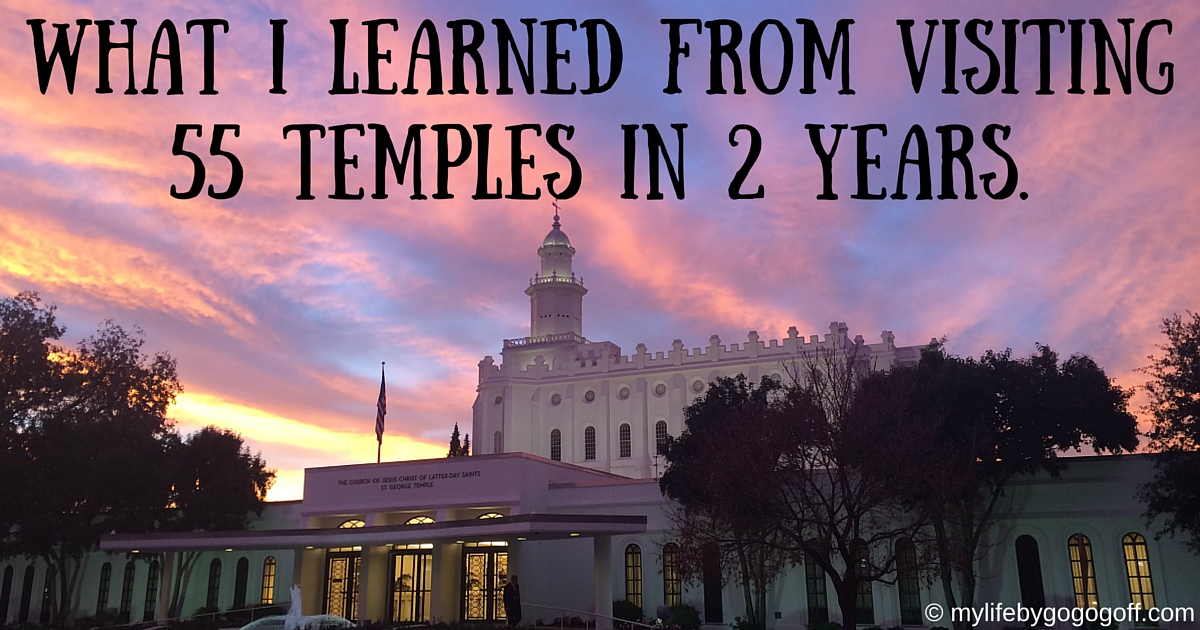 What I Learned From Visiting
55 Temples In 2 Years

As of December 31st, 2015 I had visited 55 Temples across North America ranging from San Diego California to Halifax Nova Scotia, Vancouver British Columbia to Ft Lauderdale Florida. Before I get into what I have learned, let me answer the question many of you are wondering, why/how have I as a recently returned missionary visited 55 Temples?

Let me give a little backstory, when I was serving my mission in New England (’12-’14) I had been looking forward to going to the Boston Massachusetts Temple at the end of my mission. It was a mission tradition that you get to go the Boston Temple right before you went home. But due to the surge of missionaries in 2012, my mission was cut a week short…it was cut a week into the Temple cleaning and the Boston Temple was closed. I was not able to go to the Temple. I was sorely disappointed, as my family is poor and I doubted I would ever get another chance visit the Boston temple.

After this experience I decided I would do everything in my power to never be denied entrance in the Lords house, plus I figure as a young single adult in the church I needed to keep myself anxiously engaged in a good cause, and the Temple was the obvious choice (last year I ended up going 100 times, for that story, click here)

The “how” is a lot simpler than one would think. As I mentioned before, I come from a poor family. Shorty after I got home from my mission I got a job that paid good but it requires me to travel, a lot. I drove almost 40,000 miles last year! I decided if I am going to be driving so much I can make the extra effort every time I drive somewhere to make the detour to attend the Temple (Halifax was only a 1,000-mile detour).

It has been tremendous fun traveling and taking detours to see the Temples all over the nation. Aside from the memories and pictures what I have learned has been my favorite thing. Since the new year, I have become a Temple worker. Here are a few things that I have learned from visiting 55 different Temples in 2 years.

Growing up everyone taught the Temple was sacred and that we were not allowed to talk about it. But often times people treated more like it was secret than sacred. The Hymns are “sacred” yet we openly talk about them!

When I was a missionary I saw first hand the devastation that happens when members are not adequately prepared for the Temple. Countless families in my mission went less active shortly after they were sealed, why? Because they were not taught adequately about the Temple.

We can teach that we watch a movie about the creation (as found in the Book of Moses), we can explain that we are anointed and washed like Aaron in the Old Testament and that in the Temple we wear the robes of the Priesthood that are symbolic of the promised blessings of exaltation! As long as we treat it sacredly, it is not only OK to teach those preparing to go to the Temple about it, it is important!

5 Things I wish I was told before I served a mission.
← Previous
14 dating tips from the Prophets and Apostles
Next →

Three Mormon Temples in the US to Close for Renovation