In a Season Dominated by Commercial Messaging, the Mormon Church Makes Waves

A story on AdvertisingAge today reported “Walmart Crushes Holiday Video Views, but One Bona Fide Spiritual Message Gets Through Too.” A social media chart by VisibleMeasures “counts the total number of views for each campaign” and the #ASaviorIsBorn initiative of The Church of Jesus Christ of Latter-day Saints was ranked as the 9th most viewed video with over 17 million views. 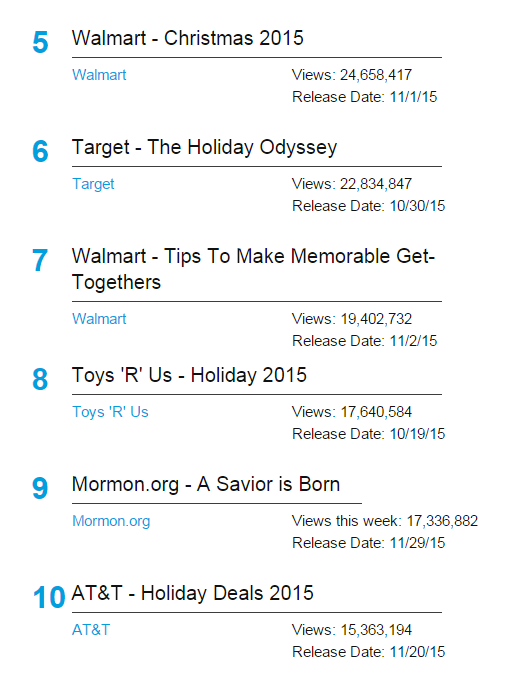 The article states, “Perhaps the least expected member of the list, in a season dominated by commercial messaging, is a campaign sponsored by the Mormon Church.”

In a world where money and acquiring “stuff” seems to reign supreme, it’s nice to be part of a church that is doing it’s part to remind the world of the meaning of Christmas. If you have not had a chance to view the Savior Is Born video, you can watch it, along with the other videos done by YouTubers as part of the initiative, here.

You can read the full article from AdvertisingAge here.

The First Christmas Through the Eyes of Joseph the Carpenter
← Previous
The Thailand Bangkok Mission Makes the Best Missionary Transfer Video Ever!
Next →
0 shares