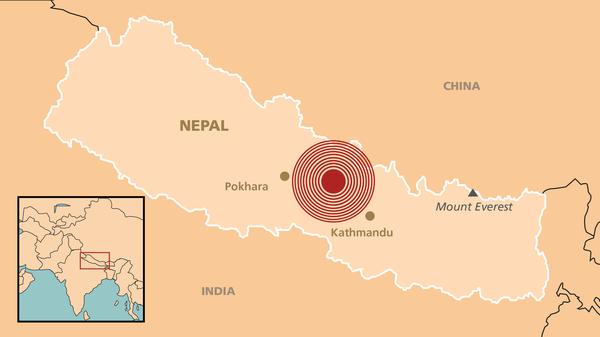 PROVO – Elder Jim Valentine had gone to the church a little early to meet with some members. His wife, Sister Chris Valentine, stayed at their apartment on the seventh floor of an apartment building. They are serving in Kathmandu, Nepal.

It was about that time the 7.8 magnitude earthquake began its violent ground shaking.

According to their son, Todd Valentine of Springville, when the earthquake started, his father grabbed a couple of members and ran for the apartment.

“When the earthquake hit, my mom ran down the stairs of the apartment,” Todd Valentine said. “They met up outside the apartment.”

Todd Valentine has been able to get just small bits of information from his parents, but he knows they are safe at the U.S. Embassy in Kathmandu.

“Their first night, they stayed outside the church because of all the aftershocks,” Todd Valentine said. “The next day, they got to the embassy with just the clothes on their backs and their passports.

“We had been waiting on pins and needles to hear from them after we learned of the earthquake. We actually heard from the church before we heard from my parents.”

Elder and Sister Valentine, Boise, Idaho, are the only LDS missionaries in Nepal and are serving as humanitarian missionaries. They also help with the church’s wheelchair program and have been helping set up water systems in Nepal.

“That morning, I was just talking with my parents about signing a job contract,” Todd Valentine said. “We have received just three or four emails from them. They did say the embassy has been very good to them.”

The Valentines’ mission president is based in New Delhi, India. They are hoping to fly to New Delhi, regroup and return to help in Nepal as soon as possible.

In the meantime, the church issued this statement over the weekend.

“Our thoughts and prayers are with all those in Nepal impacted by Saturday’s earthquake and particularly those who have lost loved ones,” Church spokesman Eric Hawkins said.

Initial reports indicate that nearly 4,000 people lost their lives in the 7.8 magnitude quake and thousands more are homeless.

As part of their humanitarian work, the Valentines have been working with Bishnu Adhikari and the CHOICE Humanitarian group.

For those who don’t recognize Bishnu’s name, he was one of the featured members of the LDS Church in the recent full-length church documentary, “Meet the Mormons”.

Bishnu and his family are safe, but hundreds of people are sending messages and prayers of hope to his Facebook page.

“The in-country director, Bishnu, is working with the Nepal government to unite with them in developing a coordinated response and relief effort,” Mayfield said on his Facebook timeline. “The stateside staff and team of experts are actively coordinating efforts locally to see that we have a comprehensive plan to help out in this area that we have worked in for so long and that means so much to CHOICE Humanitarian and those connected with them.”

The Daily Herald has received a number of communications from church members trying to help during this incredible destruction.

“When the first and major earthquake struck, I was at the church watching a session of General Conference with other church members,” said local member, Rajesh Bogati. “Suddenly the power went down and the hall started shaking. All the members were running out of the door to the church. I also rushed out but I realized that my wife had fallen down while running as we all were panicking.”

Rajesh had only been married 8 days prior to the earthquake and went back to look for her.

“I looked for her and found her lying on the ground,” Rajesh said. “I went back to rescue her, but the earth beneath shook so heavily that the chairs of the chapel were swinging. The walls were as if they would fall down on us. By that time we couldn’t go out so we lay prostrated on the ground with our heads under the chairs holding each other’s hands praying we’ll survive. As soon as the shaking stopped we ran out as we knew we needed to prepare for aftershocks. It was a horrible scene. We could hear the cries and noises.”

At least 3,617 people are known to have died and more than 6,500 have been injured according to local reports, though these figures are expected to rise as international response teams reach remote villages.