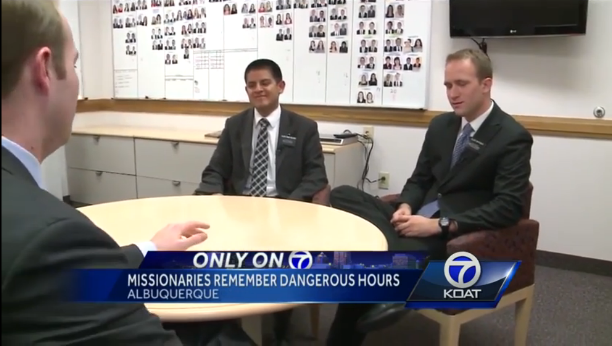 ALBUQUERQUE, N.M. —Two Albuquerque Mormon missionaries were held captive by someone they were trying to witness to last week.

Now the two are speaking out about the situation, which may have turned dangerous if they hadn’t escaped.

Elder Zuniga Delgado and Elder Michael Whitaker were witnessing in their apartment complex off of Montgomery Boulevard NE last Tuesday. They met a man at a bus stop named Erwin Smith who invited them into his home to discuss helping him move, a service the Church of Jesus Christ of Latter-Day Saints offers to many.

While inside, Smith began drinking heavily and started making suicidal statements, according to the documents. He wouldn’t allow Delgado and Whitaker to leave for more than three hours.

During that time, Smith attacked Delgado and Whitaker, physically battering them by punching, kicking and elbowing them, according to the documents. At one point, Smith got a knife and began making stabbing motions toward the back of their heads, as if he was going to stab the missionaries, the documents said.

According to the documents, Smith, at one point, said: “I’m going to kill you guys and hide your bodies in the bathtub.”

For the rest of the story, and to see a video interview with the missionaries, visit koat.com

Sister Missionary Creates Video to Inspire
← Previous
THE FAMILY: A PROCLAMATION TO THE WORLD
Next →
0 shares